Data Is a Tool for Equity and Inclusion 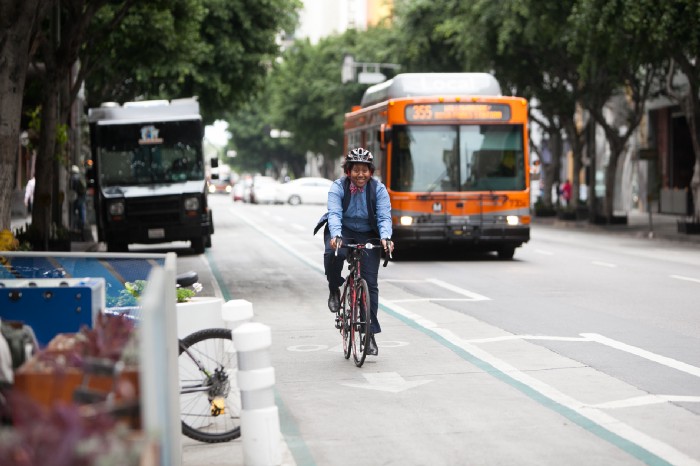 Earlier this month, we sat down with Tamika Butler, Director of Equity & Inclusion at Toole Design, and talked about the role that data can play in transit and equity.

Transit decisions are farther-reaching than ever

“Transit is inherently an equity issue because many of the folks most dependent on it are often people of color,” says Tamika Butler. “For many in low-income communities and people of color, transit is often the only way to get around.” Butler is Director of Equity & Inclusion and Director of Planning for California at Toole Design, as well as Principal of Tamika L. Butler Consulting. She’s an expert on how transit can be used as a tool for equity and inclusion.

Transit’s ability to affect change is massive, Butler explains. “The narrative used to be that a transit agency is just a transit agency, but that just isn’t true anymore,” she says. And while the anecdotes around transit are immeasurable, the impact is not. Transit’s impact can be tracked, measured, and quantified. Indeed, it’s this very quality that makes data the best tool in a transit agency’s toolbox when it comes to helping underprivileged groups and supporting equitable communities.

“Data has a huge part to play in equity, reliability, and transit,” Butler says. “But it’s dependent on what you’re able to collect and who is interpreting it.”

Data needs context to be meaningful

In transit, data is ultimately a way to tell a story about people. That’s why no matter how deep you get into a dataset, it’s important to stay in touch with its personal side. “If you’re collecting data for the sake of the numbers alone, there will always be a disconnect,” Butler says. “You have to be able to take a step back and make it about people and say, ‘This is what the data shows us about our community. This is what it means.’”

This is where breakdowns often occur and where data loses its power. Without context, datasets are just collections of numbers that can easily be manipulated or misunderstood. For example, imagine a project aimed at shortening the run-time of a route. It’s possible to reach the goal by cutting a stop that has a high dwell time. But why does that stop have longer dwell time? Maybe it’s near a senior center and by cutting the stop, older adults would have to walk farther to get to the bus. Numbers are necessary, but a holistic approach is ideal.

Data and context is a two-way street. In the same way that data needs context to make sense, stories need data to substantiate them. “What gets decision makers to act is weaving strong data into the right story,” explains Butler. “A low-income community might report that their buses or trains are always late.” But that, on its own, is often not enough to impact change. “The next step for an agency is often to ask, ‘Well, what does the data say?’” says Butler.

If the data uncovers that transit is undeniably failing low-income communities and communities of color, then the agency can build a narrative it can talk about and solve. “Those are the types of situations where data can be helpful. You’re able to tell a compelling story and know what the issue is,” says Butler. “We’ve all been in those situations where change happens because of what the numbers say.”

Where do we as the transit community even begin to tell better stories and make a more equitable future? According to Butler, it’s by looking internally. “You can’t do external equity work without first looking at yourself,” Butler says. “Who works for the agency? Who are the decision makers? What type of training does the staff do, and what kinds of continuing education are they getting? Is equity being addressed within the agency?”

Understanding more about yourself as an agency will help confront your own biases and ensure that you are making space internally for the voices that you may not be hearing. Often, equity in transit spaces is centered on the outlying community, and not on the agency itself. “To expand these conversations about equity, we must first make sure that our systems are more representative and diverse, bringing more voices to the conversation earlier on,” says Butler.

We all know how important transit is to our communities and our world, how influential it can be, and how central it is to the lives of so many. Transit is also a crucial tool for equity from the local level up. Butler’s hope is that we “don’t give up on public transportation and the transformative power that it has.” Together, we can use transit to build more equitable and inclusive communities.