The State of Public Transit 2020 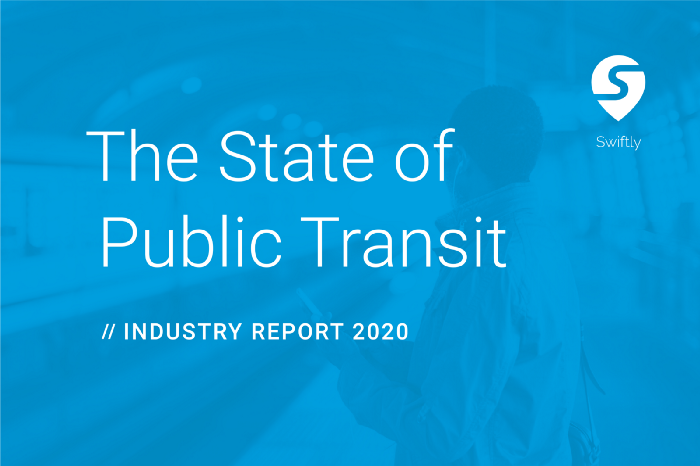 To get an inside look at the transit industry as we enter a new decade, Swiftly conducted a survey of nearly one hundred transit agencies, compiling the findings into a 32-page report. Here’s a summary of what we found.

Here at Swiftly, we believe in the power of data to improve how cities run. That’s why we regularly turn to data to understand what’s working in public transit, what’s not, and where the transit industry as a whole can benefit from change.

As we enter the new decade, public transit is in a greater state of flux than at any time in its history. On-demand apps have shaken the transportation space to its core and to a large degree have put the transit industry on the defensive. It’s a golden moment to understand what makes the industry tick.

To get an inside look at how transit professionals feel about transit’s shifting tides, Swiftly conducted a survey of nearly one hundred transit agencies across regions, departments, and roles, to glean trends and areas of opportunity within the industry. What resulted is a snapshot of the State of Public Transit in 2020.

Here’s what we found:

Over the last decade, traffic congestion has reached new highs, and transit agencies have deeply felt the effects. In particular, variability in traffic speeds has made it difficult for agencies to keep to their schedules, resulting in late buses, early departures, and frequent bunching.

In the coming decade, we anticipate that the connection between congestion and personal vehicle use will become a larger part of the broader dialogue in politics and public policy. We predict the conversation will shift toward favoring high-occupancy alternatives, including bus and rail, as answers to the problem.

This one shouldn’t come as too much of a surprise. With transit ridership trending downward in all but six cities in the US, transit professionals are eager to turn the trend around.

When asked why they chose to work in transit, most respondents had a noble or altruistic motive, like making their communities more accessible, improving economic mobility, or battling climate change. Transit professionals take that passion into work every day, with a majority saying they’d give up their cars for a year or even shave their heads to improve their agency.

In the coming decade, we predict that agencies will harness this passion and turn it into action with the power of data. In particular, we expect to see data used more regularly as a way to make the case — and win approval — for capital projects. We’ve already seen this work in places like Seattle and Austin, and we expect this to continue in the future.

3. Accurate real-time information is seen as a key to improving ridership.

Riders don’t take buses in a vacuum. They also, consciously or not, compare their experiences on public transit with experiences they have in other parts of their life. Modern transit users have come to expect accurate ETAs for Ubers and Lyfts, Amazon deliveries, and even take-out orders.

Riders want to know if their bus is on time. And while 93% of transit professionals believe that there’s a correlation between accurate real-time information and ridership, respondents also believe that, on average, their riders wouldn’t give their prediction accuracy a passing grade.

We predict that during the next decade transit agencies will make prediction accuracy one of the top metrics they track. After all, the metric of on-time performance (i.e. schedule adherence) will only lose its impact as real-time apps continue to supplant checking the schedule.

4. Operational issues are a key blocker to better service.

Transit riders lament many things, but perhaps none more than the operational issues that waterlog service reliability. This is one area where the tried-and-true could use a shake-up; manual processes are hurting transit operations.

Inefficiencies are a big obstacle to reliability: 54% of transit professionals say that operational issues are at odds with making transit systems more reliable. There’s nothing shocking here, but it’s worth noting how strongly this came through throughout the survey.

In the next decade, we expect the transit world to embrace the ‘connected bus’ to combat operational problems — from operator tablets in order to prevent bunching and gapping in real time, to collecting GPS data to pinpoint intersections to prioritize for capital projects.

5. High-frequency transit doesn’t get the attention it deserves.

Agencies’ most-ridden routes are usually along their high-frequency routes. Yet agencies find it painstakingly difficult to track the headways on these corridors, often leading to bunching and gapping and unreliable service for the heaviest-used routes in their system.

There’s a direct causal relationship between vehicle frequency and ridership, but according to our survey, more than half of our respondents don’t track headways on high-frequency routes.

Agencies looking to improve reliability can make a big impact by taking a more active role in managing bus bunching and gapping on high-frequency routes. In the next ten years, we anticipate that agencies will begin to adopt best practices in this area, incorporating metrics like “excess wait time” and “headway adherence” into their KPIs.

The decade to come

People have more mobility options than ever, which we believe is a good thing. Transit no longer carries the sole burden for improving social equity through transportation, and we strongly feel that in the medium and long term, cities will become better places because of it. In the coming decade, as the wild west begins to calcify into a new status quo, it’s imperative for transit agencies to adapt, innovate, and incorporate the learnings from other sectors.

Seeing the state of public transit as a maelstrom of outside change isn’t the only way to approach the new decade. We see the changes in technology and rider expectations as a golden opportunity to improve the things that have always made transit essential. In the end, the strongest asset in transit’s arsenal is that it is simply the most efficient way to move many people through high-density areas. The 2020s, like decades before, will continue the story we’ve seen for over a century: that mass transit is the backbone of the modern city.

Want to see the full State of Public Transit 2020 report? Get the full report here, and don’t forget to sign up for the interactive webinar!