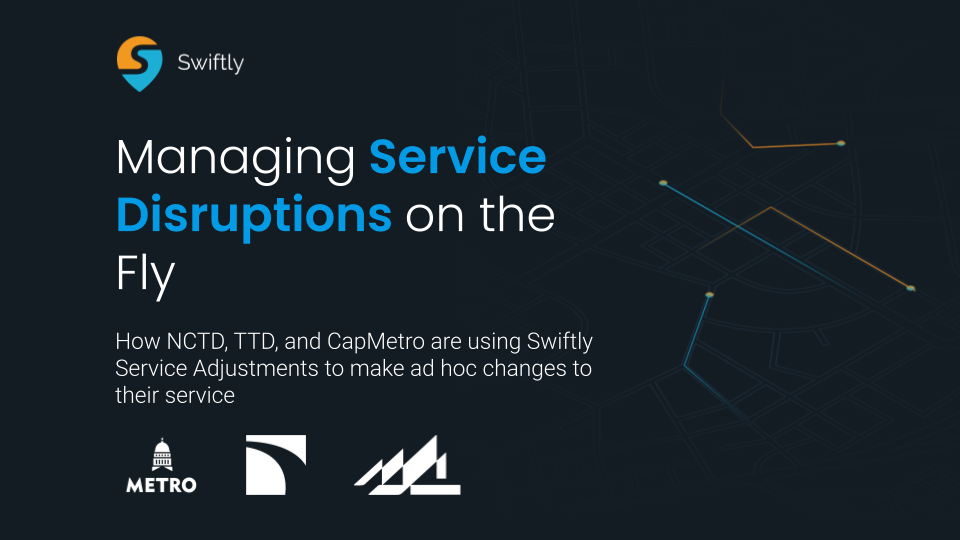 In our latest webinar, Managing Service Disruptions on the Fly, we caught up with three agencies — Capital Metro in Austin, TX; North County Transit District in northern San Diego County, CA; and Tahoe Transit District in Lake Tahoe, CA/NV — to hear how they’re using Swiftly’s Service Adjustments to make ad hoc changes to their service while keeping riders informed. All three agencies are using Service Adjustments to rethink how they stay nimble and keep service reliable. Here’s what we found out.

Cap Metro battles the Storm of the Century in Austin, TX

In February 2021, Texas experienced one of its worst winter storms on record, and CapMetro was at the center of the storm. Record snowfall shut down roads across the agency’s service area, and a prolonged deep freeze crippled the area’s energy grid, causing blackouts that lasted for nearly a week. CapMetro was forced to cancel all of its scheduled service for more than three days, the first time in history that Austin experienced a total shutdown of transit service.

“Those were three crazy days,” says Olivia Jones, Manager of Bus Service Delivery at CapMetro. “The ability to shut down complete blocks all at once, that was something that worked very well for us. It allowed us to be agile. We were able to get ahead of notifying our customers that the service was not going to operate.”

So they sent out mass notifications, incorporated the news media, and made the appropriate updates in Swiftly as soon as possible so that the affected trips would show up as not in service to the public.

“Because Swiftly is web-based, we were able to do all of this remotely,” Jones adds. “Several of us were up at 3:00 in the morning, canceling those blocks. Customers were able to see that in their real-time apps before they left for work. Without Swiftly, I honestly don’t know how we would’ve done all this.”

“For anyone who operates rail service, they’ll know that it seems like service should be very predictable, but that’s rarely the case,” says Damon Blythe, Chief Operations Officer at NCTD. “Sometimes mechanical failures happen. Sometimes backups occur on the rail line. There always seems to be something.”

NCTD’s COASTER line operates on a corridor shared by Amtrak and Metrolink trains, each with their own schedules and operations staff, which only adds to the unpredictability.

“Passengers need to know right away if something comes up that’s going to affect their ability to get to work,” Blythe says. “Covid has reduced our service significantly, so there likely won’t be another train running 15, 20, or 30 minutes behind it like usual. It might be the last train of the day.”

Swiftly’s Service Adjustments has helped the NCTD stay nimble and keep riders informed when unpredictability arises. “Prior to Service Adjustments, we would just post a message on Twitter and then manually log into every sign at every station to let people know that that train wasn't coming.

“But if you weren't using Twitter, you would have to wait until you arrived at the station, and it was time for the train to leave. Then you would be notified. Now with Service Adjustments, we can let people know ahead of time when a train isn't running, so they can find alternate transportation. We may be providing a bus bridge and allow extra time, for example.”

Now when NCTD makes a change, their real time feed is automatically updated, sending information to Google, Apple, Transit, and many other passenger-facing channels.

TTD’s love-hate relationship with snow gets a little ‘lovier’ in Lake Tahoe, CA/NV

TTD’s snowy service area at 7,000 ft attracts tourists and seasonal visitors who come to visit the area’s ski resorts. The wintery climate also means that the agency frequently has to adjust service due to weather conditions.

“We definitely have a love-hate relationship with the snow here at TTD,” says Tara Styer, Operations Manager at TTD. “Snow is wonderful for all the obvious reasons, but when you're in transit operations, it creates some unique challenges.”

In TTD’s case, these unique challenges come in the shape of impassable roads, low visibility, and generous accumulations of snow. The TTD team has designed special snow routes for when road conditions get particularly bad, but the implementation wasn’t always as seamless as they would have liked.

“Closing a stop used to be a rather tricky and labor-intensive affair,” Styer says. “First, we would send a road supervisor out and make sure that no one was waiting at the stops. Then, if we felt that a stop was going to be closed for a prolonged period of time, we’d have the road supervisor post a physical notice on that stop. Or try to, at least. As you can imagine, posting a physical notice in a snowstorm isn't exactly the best solution.”

With Service Adjustments, TTD’s love-hate relationship is tipping toward the love side of the equation.

“Now when we experience a snow event, we can easily close affected stops and cancel trips from the office or even from home,” Styer says. “We can notify passengers with a rider alert if any buses are in danger of missing connections. Service Adjustments has really opened up the lines of communication with our passengers. Its ease of use encourages our choice riders too. So we’re hopeful that it will have a positive impact on ridership as we move out of the pandemic.”

Want to hear more about Service Adjustments? Check out our announcement or watch the full webinar recording here!