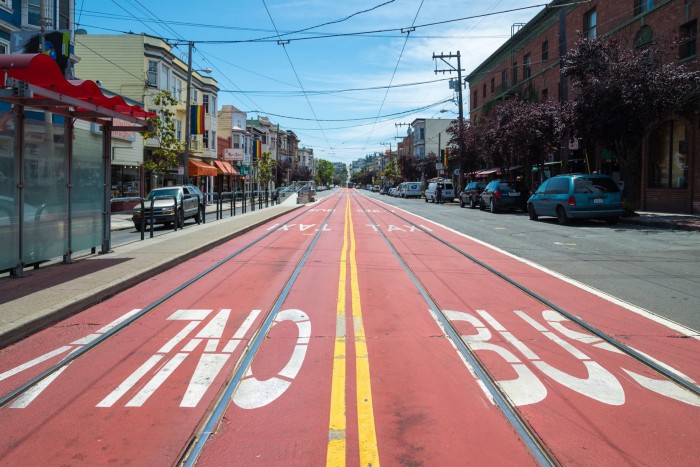 Devoted bus lanes are a hard sell in most cities, but they’re well worth the cost. That’s why we’ve assembled these best practices for prioritizing bus priority. Image: Sergio Ruiz.

Bus lanes will save us!

You know the story. Congestion is increasing, bus ridership is stagnating. What will save us? What’s transit’s ace? When it comes to bang-for-your-buck projects, nothing beats bus lanes.

If you want to speed up buses and make them more reliable, dedicated bus-only lanes are the holy grail: they reduce run-times by about 25%, increase reliability by about the same amount, and potentially reduce operating costs by millions. And the best part? It does all of this for the cost of paint.

Of course, there’s no such thing as a free lunch; taking away lanes from private vehicles is a hard sell in most cities, and enforcement, either by traffic police or by automated cameras, is expensive. This means beautifully painted bus lanes often end up looking frightfully similar to short-term parking spots for delivery truck drivers, queue jumps for impatient drivers, or one that really gets our goat, pick-up and drop-off areas for ride-hail app drivers. (It’s hard not to get livid when you see a 60-foot articulated bus carrying 200 passengers blocked by a ride-hail car that’s waiting for a single passenger.)

Our Swiftly datasets show that bus lanes are well worth the cost — but only when well-enforced and laid down in the right places. So if you’re considering bus lanes in your service area, here are some questions to think through as you put buses first.

Question 1: At which intersections would bus-only lanes be most effective?

Bus-only lanes are less about the miles of paint you have and more about where the paint is. Focusing bus priority at troublesome intersections is the best place to spend dollars and political capital. Cities like Seattle have taken this “micro-project” approach, creating a Transit Spot Improvement program that has installed queue jumps at busy downtown intersections. VTA in California has improved vehicle speeds through a similar approach. Rather than focusing on corridors, a network of small bus priority improvements paired with enforcement can be a more effective approach.

Question 2: What data do you have to pull insights from?

Transit agencies can save big money by funding bus lane projects and enforcement — and data is an essential ingredient for swaying opinions at city hall and beyond. Quantifying the cost of congestion will help garner backing for bus-only lanes from internal and external stakeholders. VTA, for example, equated the 20% speed declines due to congestion to $70 million per year in operating costs.

As you look at implementing bus lanes, ask yourself these questions: What is the current travel time during peak hours? What intersections are most responsible for the travel delay and impact the most passengers? Where do we have space to put a queue jump? How much is congestion costing your agency?

Armed with this data, you’ll have a compelling argument when discussing bus-only lanes with (potentially antagonistic) partners.

Question 3: Who are your partners?

Which brings us to our next question: Who are your partners? Consensus-building is a core component of transit planning but it shouldn’t be over once the project is complete. There needs to be a coalition of city leadership, DOTs, transit agencies, advocates, and law enforcement to ensure that transit continues to be prioritized.

Bus-only lanes have traditionally been proposed as a singular capital project that’s implemented and over with, rather than consistently enforced and prioritized. Enforcement can take many forms but there’s absolutely nothing groundbreaking about it: better (clearer) signage, driver education, and citations.

Finding where to prioritize

It’s essential to target intersections with the longest delays that impact the most riders. Knowing what is preventing bus lanes from succeeding can inform exactly what enforcement strategy to take. We’ve seen some agencies create transit lanes, and then use the results to win political backing for more permanent solutions.

Whether an agency is implementing new bus lanes or revitalizing the bus lanes of yore, enforcement and continued prioritization must be included in the cost projections and must be an ongoing focus for improving service. There’s never been more competition for our streets. DOTs, transit agencies and law enforcement have to prioritize moving people safely and efficiently. Cities need to give transit the chance to succeed.